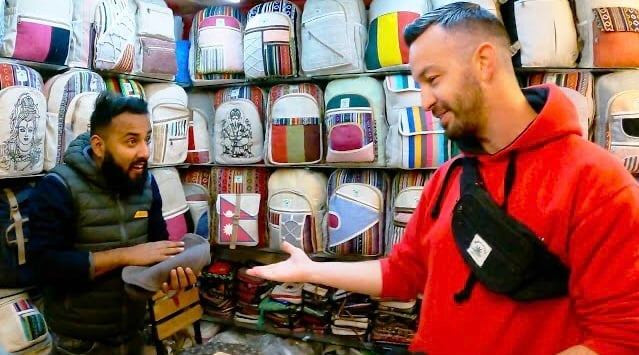 First off, you're probably wonder why I spent all 4 weeks in Kathmandu. I did plan to visit other cities, but I was sick for the first 3 and a bit weeks. Starting off with the shits from Pakistan which pretty much stopped me from leaving the apartment, then with a chest infection. I'm not used to the cold anymore, so going from months on end at like 30 degree heat, to like 5 degrees, my body didn't appreciate it. Also the first apartment had glassless windows - which is just idiotic in a city that gets really cold, especially at night. Not only that, it's dead loud at all times in Kathmandu because people just beep their horns constantly for no reason.

The touristic part of Kathmandu, called Thamel, is just laced with scammers and drug dealers. Nepalis can be annoyed at me for saying that all they want, but it's true. I was so sick of being approached by some guy pretending to be friendly, only then for me to have to get aggressive or he wouldn't leave me alone, that I made a video exposing them. They all have the exact same crap script, then lie their arses off when you confront them. Some are just touts getting you to some art shop, some are drug dealers, some try to get you to visit illegal brothels where the girls have been trafficked, whatever it is, they're very irritating, although, they don't seem dangerous. Maybe because they're all about 1 metre tall, max.

Kathmandu is very dusty and polluted. The hotel I stayed at for the last 3 weeks was decent actually and the guys who worked there were cool.

The food is very cheap unless you find a tourist trap restaurant. Momo's are decent. The food seems to be half Indian/half Chinese. Winner.

The guys in the hemp bag shop 'Hemp Headquarter' were very cool, genuine guys. I'd definitely suggest buying a bag or two from them if you're there.

Most of the shops in the market I visited inflated their prices to higher than UK prices for real things, but they were fake Chinese crap. Then, in the words of a local, "you have to bargain, HARD" - that's unacceptable, shopping shouldn't be a game. I want to buy some trainers, why do I need to start arguing with the owner, just put the price of the shoe on show. It's like they're trying to squeeze every penny out of you. Not showing a price is bizarre, they literally just make the price up in their heads and hope you don't bargain well. Pretty dishonest way of being a salesman in my opinion.

I had no intention of trekking, not my thing. I flew to Nepal as it was one of the only places that had no stupid restrictions that I could get to on this side of the world. I wouldn't return to Nepal, probably not to any other cities there either to be honest.

By: Martin Mulvey | 24th Dec 2021
Pakistan trip with Kurt Caz Thailand: Bangkok, Pattaya & Train to Chiang Mai
We use cookies on our website to improve the customer experience. Your cookie settings can be changed at any time through your browser settings. I understand